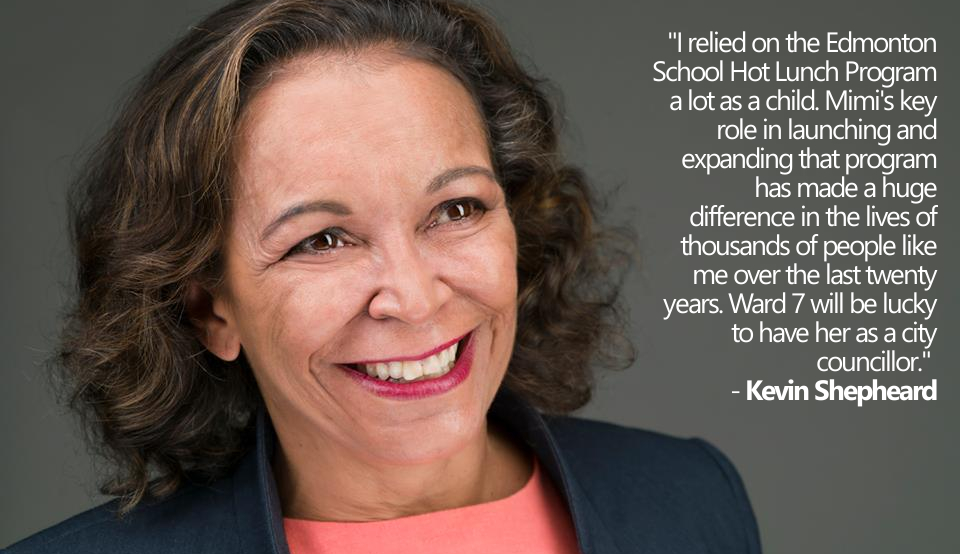 Mimi’s community service began as a pre-teen in her hometown of Scarborough, Ontario where she actively raised funds for Variety Village, an organization which helps young people with disabilities and those who face developmental barriers to achieve life goals, and participated in the MS Society Bike-a-thon starting at the age of 10 (when her parents finally gave their permission).

From her late teens to early twenties, she was one of the founding volunteers at the original Ronald McDonald House in Toronto. After arriving in Edmonton in 1986, she sat on the Human Resources Committee for the AIDS Network Society of Edmonton (now HIV Edmonton), participated in the Block Parent and Neighbourhood Watch programs, and volunteered for the United Way. She served in a variety of capacities for a number of her sons’ North East Zone hockey, soccer and baseball teams.
​
Mimi was one of the founding members of Eco-City (the non-profit activist organization devoted to urban sustainability founded by the late former councillor Tooker Gomberg) and was a key agent behind getting the Edmonton’s School Lunch Program off the ground (serving as one of the founding co-chairs).

Mimi served as Education Spokesperson for the Edmonton Voters Association, an organization focussed on advancing a progressive agenda at city hall and the school boards. Around that same time, she was Co-Chair (with Audrey Cormack, the Secretary-Treasurer of the AFL) of the Alberta Pay & Employment Equity Coalition, comprised of labour unions and social justice organizations from across the province; and Edmonton Co-Chair (with Mary Burlie from the Boyle Street Co-op) for the Canadian Labour Congress/National Action Committee on the Status of Women’s 1995 Women’s March Against Poverty.

Along with volunteering to assist students with disabilities, Mimi was active in a number of campaigns and initiatives when she attended the University of Alberta, including being Co-Chair of the campus NDP club. She was awarded the Lou Hyndman Edmonton Glenora Award for Academic Achievement & Community Leadership two years in a row during her undergraduate studies. She has sat on school parent councils, playground fundraising committees and worked on numerous community empowerment initiatives.

Mimi served on two different occasions on the board of the Alberta Avenue Community League and was a member of the initial City of Edmonton/Alberta Avenue Revitalization Advisory Board. She has been a frequent delivery volunteer for the Christmas Bureau and has served as both a canvasser and Zone Captain for Diabetes Canada.

Mimi has volunteered at the Folk Fest, The Fringe and the Edmonton Rock Music Festival, as well as helping out at or with events for organization such as Little Warriors, iHuman, the Mustard Seed Church and many others too numerous to list.

Mimi grew up in a union household (her dad was a member of the United Autoworkers and then the Canadian Auto Workers Union). She is a proud trade unionist and has held a number of appointed and elected positions within the unions to which she has belonged. Mimi is currently a proud member of Canadian Freelance Union section of Unifor, Canada's largest private sector union.