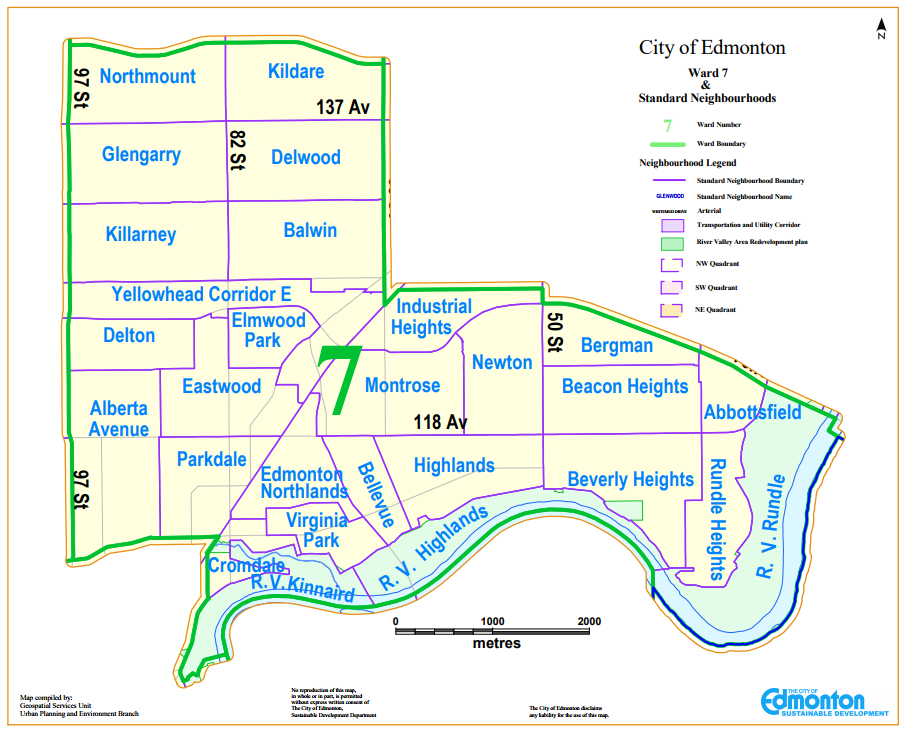 In 1882 the property which is now the neighbourhood of Abbottsfield was owned by E. F. Carey, co-founder of the merchandising firm of Norris and Carey and one of Edmonton’s most prominent nineteenth century citizens. Since the Abbottsfield area was east of the Town of Beverly, it remained a rural area beyond the limit of urban development until it was annexed to the City in 1961.

The Alberta Avenue area developed in a piecemeal fashion between 1906 and 1912 as Edmonton’s real estate brokers and speculators capitalized on the “land boom” which was sweeping the prairies during this period. During this rapid growth period, the basic physical layout of Alberta Avenue as we know it today was established.

If you live in Alberta Avenue, you vote at Delton Elementary School, 12126 – 89 Street.

The area known as Balwin became part of Edmonton in 1912. Early in the 20th century this area was known as Packingtown, as most of the families who lived in the area worked at the nearby meat packing plants. The name of this neighbourhood is derived from the combination of the names of two early property owners, Frank Ball and Luke Winterburn.

The residential area now called Beacon Heights began to develop in 1910, when the rich coal seams that lay beneath the soil were discovered and coal mining began. In 1913, the area was incorporated as the Village of Beverly, taking its name from the Town of Beverly in Yorkshire, England. By 1914 the population in the area reached 1,000 and Beverly was incorporated as a town. The boundary line between Edmonton and Beverly was 50th Street.

The Bellevue neighbourhood began to develop around 1907, to the west of the Edmonton’s Northland site. Perhaps with reference to the French term for “beautiful view,” Bellevue sits atop the banks of the North Saskatchewan River and benefits from an excellent vista of the river valley and the city’s downtown skyline.

Bergman was named in honour of Gustave C. Bergman, who was the first Mayor of the Town of Beverly. In the decade leading up to amalgamation, the southern part of Bergman shared in the residential construction boom experienced by the Town of Beverly. Much of south Bergman was developed but municipal services were not extended to the northern part of the neighbourhood until a major subdivision re-plot was initiated in 1974. As a result of re-subdivision and the construction of municipal service lines, significant new residential construction took place during the 1980s. Almost half of the homes in Bergman were built during this period.

The residential area now called Beverley Heights was first plotted on an 1882 map of the Edmonton Settlement, and shown as River Lots 36, 38 and 40. The area began to develop in 1910, when the rich coal seams that lay beneath the soil were discovered and coal mining began. In 1913, the area was incorporated as the Village of Beverly, taking its name from a town in Yorkshire, England.

Cromdale is one of Edmonton’s oldest inner city neighbourhoods. Its development began soon after a streetcar line was extended from the city’s central business district east along Jasper Avenue, north on Kinnaird Street (82nd Street) and then east again on Pine Avenue (112th Avenue).

The Delton area was annexed to Edmonton in 1910, a time when Edmonton was expanding rapidly and subdividing land for development. Upon annexation, Delton was over a mile from the nearest settled subdivision and just south of the old Grand Trunk Pacific Railway. Most of Delton was subdivided with a grid pattern of streets, which was common before WWI. However, most development did not occur until after WWII.

The Delwood areas was first populated in the early 1900s, but developed primarily in the 1960s. The neighbourhood is bounded by 137th Avenue to the north, 82nd Street to the west, 132nd Avenue to the south and 66th Street to the east. Josef Chelen Park, located in the northeast corner of the neighbourhood, was named after Josef Chelen who was a Polish-born market gardener in the Beverly Area.

Elmwood Park is a compact, small neighbourhood. Except for 122nd Avenue, Elmwood Park is bounded on all sides by major roadways. A mixture of multi-family structures faces 82nd Street. The majority of the neighbourhood is single-detached homes, and most were constructed between the late 1940s and the 1950s. The homes were designed to accommodate returning WWII veterans, many of whom were given to planting Elm trees along the boulevards.

Glengarry is located north of the Yellowhead Corridor. The neighbourhood experienced the bulk of its residential development in the 1960s, with some construction beginning after WWII and some extending into the 1980s. The neighbourhood of Glengarry replaced the older subdivisions Sunalta and Nameyo Park, which had existed from the early 1910s. Glengarry, which means “rough water glen,” was named after a Scottish glen in Inverness-shire.

In 1911, McGrath and Holgate built their mansions on Ada Boulevard, a roadway named after McGrath’s wife. Other large houses were built along or near Ada Boulevard, while more modest housing was located further from the valley. The Highlands was annexed to the city in 1912 and a streetcar line, which operated from 1912 to 1945, ran long 112 Avenue. While development in Highlands began during the 1911 land boom, the neighbourhood only partially developed and the remaining lots mostly developed during the late 1940s and 1950s.

Kildare, Londonderry Mall and several surrounding neighbourhoods are named for Irish towns and counties. Kildare is named after the town and county of Kildare, Ireland. Most of Kildare was developed during the 1960s, but residential development continued well in to the 1980s. The major structure type in the neighbourhood is the single-detached house, although almost half of the total dwelling units are contained in row houses, collective residences and low rise apartments.

If you live in Kildare, you vote at Londonderry Community League, 14224 – 74 Street.

If you live in Killarney, you vote at Killarney Community League, 8720 – 130A Avenue.

Montrose was mostly developed prior to 1950, and most of the remainder was developed before 1960. The Montrose neighbourhood has a diverse mix of land uses, including residential, commercial, industrial, and recreational. In 1951 Montrose Elementary School was opened, and Edmonton City Council decided that the neighbourhood should be named after the school.

Newton was subdivided before it was part of Edmonton, but was soon absorbed through two annexations. The portion north of 123rd Avenue was annexed with the town of North Edmonton in 1912, and southern Newton joined Edmonton in 1913. Many of the residences in southern Newton were built before World War II, while the northwest corner of the neighbourhood continued developing well into the late 1990s.

The neighbourhood design is based on a modified grid pattern and features a distinct separation of land uses. Residential land accounts for almost most of Northmount’s property area, and most of these properties were developed during the late 1960s and early 1970s. Three schools, a large park, community league facilities and the Dickensfield Extended Care Hospital account for all institutional land within the neighbourhood. Commercial land use makes up the remaining land uses in Northmount and the North Town Centre is located in the southwest corner of the neighbourhood.

If you live in Northmount, you vote at  Northmount Community League, 8720 – 130A Avenue.

Parkdale’s name is likely a descriptive term, and has been in use since 1907. In 1908, Edmonton began construction of a streetcar railway and one of the system’s first lines ran along Alberta Avenue (118 Avenue). Development of Parkdale soon followed, and since that time the neighbourhood has remained a largely residential neighbourhood.

In 1882, the area now called Rundle Heights consisted of two land holdings at the northeast corner of the Edmonton Settlement, east of the Town of Beverly. A portion of the holdings, the flat land near 111th Avenue, was developed early but most of the area remained rural until it was annexed in 1961 by Edmonton.